Proud Mum Moment #3 How to Clean Up Your Room 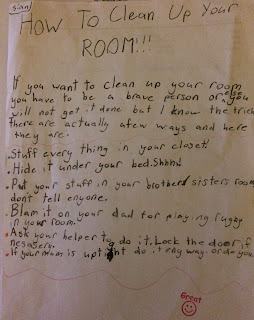 How To Clean Up Your Room

If you want to clean up your room you have to be a very brave person or else you will not get it done but I know the trick.

There are actually a few ways and here they are.

Stuff everything in your closet!

Hide it under your bed. Shhhhh!

Put your stuff in your brother/sisters room! Don't tell anyone

Blame it on your dad for playing rugby in your room.

Ask your helper to do it.

Lock the door if necessary.

If your mum is uptight do it anyway ... or do you? 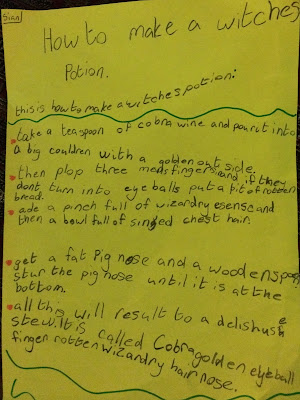 Another one of Sian's astonishing snippets of writing came home, scrumpled in the bottom of her bag.

She says she just wrote it just for fun.

How to Make a Witches' Potion.

this is how you make a witches potion: 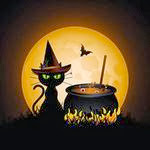 * get a fat pig nose and a wooden spoon. Stir the pig nose until it is at the bottom.

* all this will result to a delishus stew. It is called cobra golden eyeball finger rotten wizardry hair nose.

There's Soup on my Fly 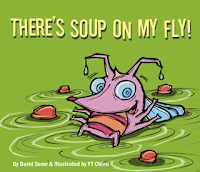 Last week I went to see the Storybook Theatre's 'trial' performance of 'There's Soup on my Fly' by David Seow which will be released next February. David is a good friend of mine but any of you who know him will understand he can be somewhat 'unpredictable.' So I was a little nervous. This was the first time he had seen the interpretation of his story. What if things went wrong? What if he didn't like it? 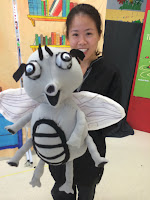 But, of course, Storybook Theatre were fantastic and we were treated to a clever mix of humour, music, dance and puppetry. We all loved it. Especially the very adorable children who were lucky enough to be little guinea pigs (and puppies, kittens and hamsters) for the preview performance. There was plenty of audience interaction and the kids were calling out, barking, meowing and squealing with delight all the way through. I couldn't wipe the grin of my face.

Storybook Theatre brings books to life and introduces children to performance and local authors.  Click here then scroll down for more details. 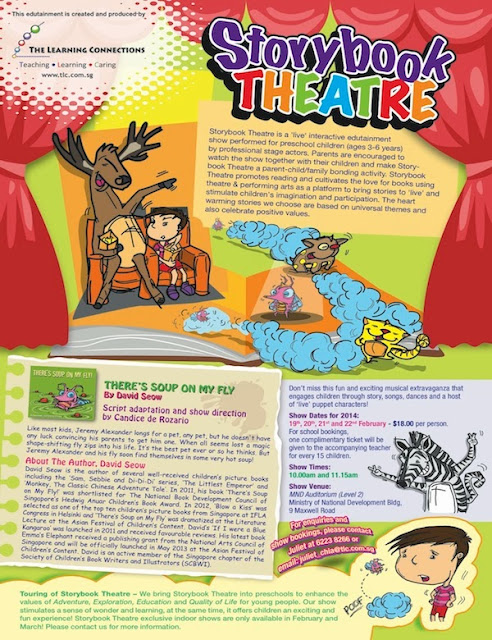 
I just completed a three day novel writing course with fifteen of the most inspiring and creative people I have ever met. Here we are all are at the end of the course looking incredibly inspired and somewhat intellectually drained. After such an intense three days, it was sad to say goodbye but happily, we all swapped emails and already have a facebook page where we intend to share our writerly news and hopefully, establish some critiquing relationships.

The course was run by Curtis Brown Creative as part of the Singapore Writer's Festival. It was tutored by  Anna Davis and Jake Arnott, so we knew we were in good hands.

Anna is an agent for Curtis Brown UK as well as director of Curtis Brown Creative. She is also the author of 5 novels which have been published around the world in over twenty languages.

Jake is the author of six best selling novels, two of which have been serialized for British television.

The course itself, Writing Your Novel - From Beginning to End and Beyond, was certainly everything it promised to be. We discussed beginnings, character, point of view, story, plot, editing, rewriting, endings, letters to agents and how to get published. We also did plenty of writing exercises focussing on our own work and got a personal twenty minute critique of our manuscripts from both Anna and Jake. Invaluable stuff!

Personally, I got a great deal from the course. Not only did I have several epiphanies about how to improve my story, but I also enjoyed listening to the enormous diversity of stories taking shape amongst the participants. We had crime thrillers, historical fiction, autobiographical, dystopian, photographic and detective novels as well as my children's story and more. It was a delight and an honour to get a glimpse into the creative process of this amazing group of people.

I also enjoyed getting out of my pyjamas and leaving the school run, dinner and dishwasher hum drum to my ever supportive husband for several days :-)

Curtis Brown Creative have a new online novel writing course available. Applications open soon and the next course starts February 2014.
Posted by Unknown at 17:03 No comments: 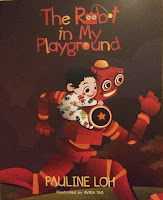 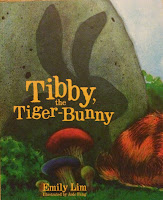