Rottnest - I got an AWARD!

I'm writing this blog from my sunny balcony on Rottnest Island. I'm overlooking the ocean, the waves are rolling and the air is full of salt and eucalyptus. I'm here for SCBWI WA's annual Rottnest Retreat so not only am I in one of my favourite places in the world, but I can talk about writing all day without boring anyone. Everyone here is as obsessed with children's books as I am. It is heaven.

This is my third SCBWI Rottnest retreat. It's four days of fun, laughter, peace and creativity. I look forward to it every year, but this year has been very special because I won an AWARD!

With my very own name engraved on it *squee*

I'll show it to you in a moment, but first I need to give you some background.

One of the traditions at Rottnest is the 'Two Minute Pitch'.

The idea is we get two minutes each to pitch our story idea to the group, making it sound as enticing as possible.
(This is hands on practise for when we trap some hapless publisher/agent in the queue for the loo and have two minutes to convince them to sign us up).

Whoever gets the first publishing deal for their  pitch wins the award.

Does this mean I get a little gold sticker on my book cover?
Hmmm. Maybe not.

Thank you everyone at SCBWI WA for being a great group of people
For all the fun and encouragement and support over the years
Getting this award felt like another great big hurrah from my very own personal cheer squad.
You guys rock!
Now race you for the Pitch Award 2011 !!!

My tiny piece of the AFCC Pie

Attending The Asian Festival of Children's Content (AFCC) the last three years in a row has been one of the highlights of living in Singapore for me. AFCC is Asia's biggest celebration of children's books. And 2013 was by far the most exciting for me so far.

First I got to have a cocktail with the beautiful Renae Hayward who came across from Perth for the event (as well as a bit of a holiday). Renae and I met through SCBWI WA in 2009 and have been on the same writerly journey together ever since. Her first book Barking Mad will be released by Walker Books Australia in August 2012 - just a few months before mine. We couldn't wipe the smiles off our faces.  Being together in this fabulous city with a book contract each, was not something we ever dreamed possible when we met four years ago.

Secondly, I was lucky enough to sit next to Wendy Orr at dinner. I have always been a huge fan of Wendy's, particularly her Nim's Island stories. To me, her writing is brilliant. When I read Wendy's books, her writing is invisible and I see only story. I must be her greatest fan! Here I am doing my best to impress her. Luckily we are both wearing bibs, because I am splashing chilli crab everywhere. 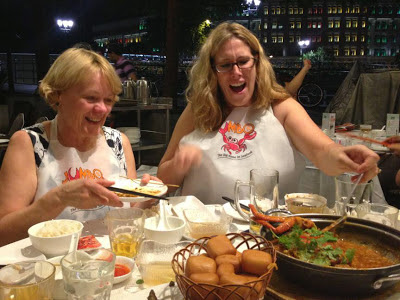 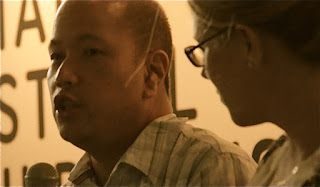 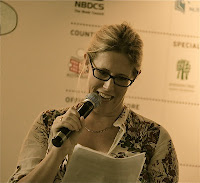 Thirdly I had the great honour of hosting a book launch for my good friend David Seow's 28th picture book, Emma's Elephant. David is one of Singapore's most popular and prolific writers and I was thrilled to be a part of it.  I'm getting better at this public speaking thing. Next time I might even relax enough to smile. Thanks Candy Gourlay for the photos :-) 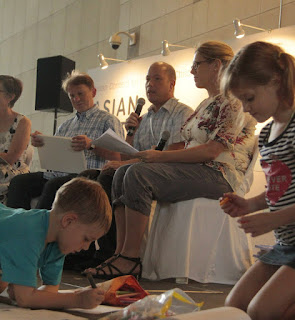 And fourthly, I got to see the sun set over Singapore with some of my favourite people. The ever gracious and supportive Norman Jorgensen (Award winning Author of The Last Viking and In Flanders' Fields),  his lovely wife Jan (amazing school librarian extraordinaire)  and my husband, Jeff (who has read every word I've ever written and has the patience of a Saint).

There were so many more highlights, of which I failed to take photos because I was so enraptured at the time. But in summary,  it was a joy to see so many familiar faces. An inspiration to mix with such talented writers and illustrators. And a complete thrill to be a part of one of the most exciting literary events of the year.

I've been inspired to blog after a wonderful writerly week at the Asian Festival of Children's Content (AFCC) in Singapore.
http://afcc.com.sg/

I attended the AFCC back in 2011 and 2012, but 2013 was my first year with a publishing deal under my belt. My first chapter book, Darcy Moon and the Deep Fried Frogs (working title) is signed with Fremantle Press and is due for release early 2014.

But more about that another time.

This blog is a reach out to all of those aspiring authors I've talked to over the years, all those I've met at AFCC, and all those I know are out there, who share my secret dream, almost too raw and private to share, that one day I might get published.

I've kept this dream inside of me my whole life. Since I was a small girl reading under the covers with a torch.

But it wasn't until 2007, after the birth of my second child, that I actually allowed myself to try. Before that, I had been too scared of failure to admit how much the dream meant to me.

I lived in Perth, Western Australia. I wanted to write for children but had no idea where to start. I found a local writer's group (very easily through google) and joined a 10 week short story writing course at the Peter Cowan Writer's Centre.

We were required to write a short story and read it out the following week. I was terrified. But I stood up and read my story. I was told the story was 'nice' but full of cliches. Cliches! I looked up the word when I got home and wept. Then I got my pen out and began to write another story, careful to avoid cliches.

I learned many things that day.

Firstly, avoid cliches when writing (Yes, I had that much to learn!)

But also, that if I wanted to be a good writer, I was going to have to work at it. Work hard.

Through PCWC,  I learned about the Society of Children's Book Writer' and Illustrators (SCBWI) and joined up in early 2008.

I felt like a fraud when I attended my first meeting but was inspired and thrilled to meet so many talented and passionate people.

These people have supported, encouraged and inspired me ever since.

I joined an online critique group with some other aspiring SCBWIs. Critiquing others' work was as much a learning experience as getting my work critiqued. I highly recommend joining a critique group.

Through this critique group, I heard about and enrolled in an online writing course. I completed the Diploma in Professional Children's Writing through Cengage Australia. I absorbed every word. I wrote whenever my children slept. I lived and breathed my story.

In mid 2010, I completed my first manuscript. It had taken me two years.

I attended the 2010 WA SCBWI Rottnest Retreat and paid a visiting editor to critique the first 10 pages of my manuscript. Her feedback was invaluable, and I realised I had a long way to go before my manuscript would be anyway near publishable.

But I didn't have time to dwell on things, because soon after, we discovered we were moving to Singapore. With two children under 5, the move kept me busy and when I picked up my manuscript six months later, I was able to see it with fresh eyes. I knew exactly where I needed to make changes.

I rewrote the whole thing.

In the mean time, I had joined the Singapore SCBWI group and was happy to find they met every month to discuss all things writerly in Singapore, and critique each others' work. Fantastic!

I kept writing, and kept getting feedback through every avenue I could access (competitions, conferences, panels, peers) and eventually, by early 2012. I had a manuscript I was happy with.

So then I started researching publishers. Were they accepting unsolicited manuscripts? What sort of titles did they publish? All that stuff. Scary.

Fremantle Press were accepting manuscripts by West Australian Authors or with West Australian content and setting. And they had a strong children's section, which included mid grade. My manuscript seemed like the perfect fit.

So I sent it off.

And 7 weeks later I got a 'we would like to publish your manuscript' email.

I almost wet myself.

It was a miracle!

A miracle five years in the making.

This is my story.

And for every book published, there will be a different story.

Keep working on yours.